Queen says ‘issues raised, particularly that of race, are concerning’ but adds they will be dealt with privately

The Queen has sought to draw a line under damaging racism claims made by the Duke and Duchess of Sussex, saying that issues will be dealt with “privately” by the royal family.

The monarch expressed her “concern” over allegations of racism and her sadness on learning exactly how challenging the couple had found life as working royals, though she said some recollections of events differed.

Buckingham Palace finally broke its silence on Tuesday evening over the claims made by Meghan and Harry in an interview with Oprah Winfrey. Meghan revealed she was left feeling suicidal, while the couple said a member of the royal household had asked about  how dark their unborn son’s skin would be.

After growing pressure to respond, a short statement issued on behalf of the Queen read: “The whole family is saddened to learn the full extent of how challenging the last few years have been for Harry and Meghan. The issues raised, particularly that of race, are concerning. While some recollections may vary, they are taken very seriously and will be addressed by the family privately. 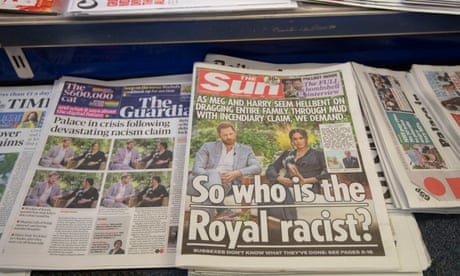 Society of Editors in turmoil over its Meghan statement

“Harry, Meghan and Archie will always be much-loved family members.”

The statement followed two days of crisis talks among senior royals and palace aides over how best to handle the very public fallout from the interview.

Buckingham Palace had no advance warning of what the couple had said before the broadcast on CBS in the early hours of Monday, which was watched by more than 11 million UK viewers on Monday night, taking its transatlantic audience to almost 30 million.

The couple’s allegations, particularly on race and mental health issues, led to calls for an investigation by the palace. The palace statement indicates the Queen favours private engagement with the couple as the best way forward.

The couple agreed to the Winfrey interview in order to share “their truth”. The wording of the Queen’s statement indicates other members of the royal family may have different truths, but there is no hint of criticism of the couple in it.

It is unclear which issues the Queen is referring to when she says “recollections may vary” but it could refer to remarks over Archie’s skin colour, or, perhaps, the fact the couple believed protocol was to be changed to deny their son the automatic title of prince when Charles accedes the throne

The Queen stressed her affection for the couple, with warm affirmation that they would remain “much-loved” members of her family, as she has done in all her official statements on the subject of their departure as working royals.

The three-paragraph, 61-word statement did not contain any condemnation of specific events alleged to be racist, although the Queen did acknowledge race as one of the main issues raised. Nor did it state the couple’s “truth” as absolute, in effect suggesting the palace disputed some of the claims.

It came as Prince Charles was seen in public for the first time since the allegations aired. Visiting a pop-up vaccination centre in north London, he was asked by a journalist what he thought of the interview. He laughed and carried on walking without making any comment.

Boris Johnson has refused to comment on the debacle. However, on Tuesday Downing Street declined five opportunities to distance itself from a tweet by Zac Goldsmith, the minister, Conservative peer and ally of the prime minister, saying Harry was “blowing up his family” and adding: “What Meghan wants, Meghan gets.”

There had been mounting pressure for a Buckingham Palace response to the claims. The shadow health secretary, Jonathan Ashworth, told BBC Radio 4’s Today programme that “allegations and accusations have been made – they obviously need to be looked at”, adding it was a matter for the palace. Labour’s leader, Sir Keir Starmer, has said the issues raised were “bigger than the royal family” and “for too many years we’ve been too dismissive and too willing to put these issues to one side”. 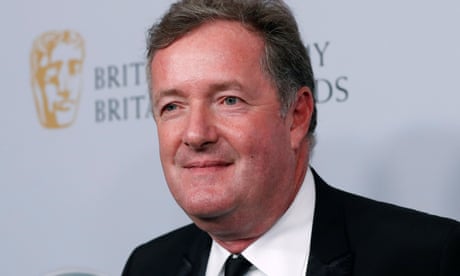 Charles Anson, the Queen’s former press secretary, said the statement was what he had expected. “It’s important to underline the fact that there is an understanding about what the debate’s about. To ensure the public knows that the family are taking this seriously, but that they wish to deal with them in the family context,” he told Sky News. Penny Junor, who writes about the royals, said it was a statement of “dignity” but also of “sorrow”.

Tony Blair’s former spin doctor Alastair Campbell said: “They were never going to get into a ‘he said, she said’ rebuttal.” Before the statement was released, Campbell, who advised the Queen in the aftermath of the death of Princess Diana, had said silence might be the best policy on this occasion.

“The situations are very different,” he said, adding that Diana’s funeral was a national event. “Whereas this, I think, is a pretty extraordinary and a pretty explosive media frenzy, but that ultimately is what it is. So I’m not sure I would advise them to do anything much beyond what they are doing – which is not very much.”

Aides did not disclose on Tuesday if Harry and Meghan had spoken privately to other members of the royal family since their interview had aired. It is understood the palace’s delayed response was likely to be because it was waiting until after the interview was aired in the UK on Monday night.

The statement is, however, unlikely to be the end of the matter. The couple’s remarks, especially those on race and mental health , will be perceived to have caused long-term damage to the monarchy. A key part of the work of members of the family involves diversity, inclusion, equality and mental health, and the interview had raised questions about these very issues.

Among the most shocking claims in the two-hour TV interview was the allegation that a member of the royal family had raised with Harry “concerns and conversations” about what colour Archie’s skin would be when he was born.

Meghan suggested the fact Archie was mixed race meant he was denied the title of prince and the security protection that went with the title.

Of life inside the palace, Meghan said she “didn’t want to be alive any more”. Asked if she had contemplated suicide, she replied: “Yes, this was very, very clear, and very scary.” She had sought help from the “institution”, she said, but it was denied.

Meanwhile, Harry criticised his father, saying he felt “let down” by Charles and adding: “There’s a lot of hurt that happened.” He accused Charles of not taking his calls after the couple’s public announcement they were to step down as working royals, and claimed that the couple had been cut off financially.

The Sussexes said they would not divulge the name of the family member who made the remarks about Archie, though Harry privately told Winfrey it was not the Queen or Prince Philip, the US presenter said.

After the interview, a snap YouGov poll found the British public split on whether the couple were treated fairly or unfairly by the royal family. It found 32% believed they were treated unfairly, while an equal proportion did not, and 36% did not know. Nearly half (48%) of 18- to 24-year-olds sided with Harry and Meghan, while 55% of over-65s supported the Queen